Skip to content
Our time in San Diego is over and it’s has gone in a whirlwind.  Not sure how that happened!!
When we planned our honeymoon we thought it was best to fly into California on the way to Hawaii to break up the trip and adjust to the time difference. I have never been to San Diego so I didn’t really have any expectations, but what I found was a fun city which had so much to offer.
So…We had three full days in San Diego and here’s what we packed in.
Day One
We had originally left our first day clear in case we were possessed by jet lag. Rishi’s sleeping has been all over the place recently so I was concerned it would be worse with jet lag. It turns out that I shouldn’t have worried. We slept okish, felt like we wanted to get out and about, and we were able to make it out at a decent time. We had decided from the outset not to hire a car in San Diego because we were just there for a few days, it’s a city and we didn’t know how much we would be out and about. Looking back I still think it was the right decision for us on this trip but, in America, life is definitely easier with a car. So our first day we walked to San Diego Zoo (voted the worlds best zoo) and then through Balboa Park (a personal favourite) in the afternoon.

This was a pretty long walk and on our first day we clocked up about ten miles in total! 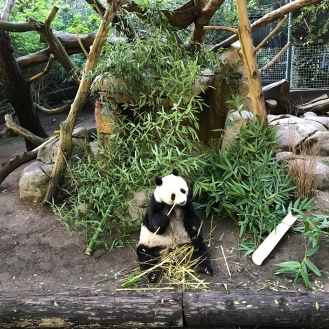 I have mixed feelings about zoos to be honest but I try to focus on the good they do. If you decide to go, you won’t be disappointed. It’s massive but easy to get around, good for families and also interesting for adults. So I’m pleased we ventured out. The walk through the park was a surprise and was a great way to finish off the day. In the evening, we decided to stay in and have take-out. It was the best way to spend it. Bottle of fizz and a pizza … couldn’t be more perfect for me.  If you’re in the neighbourhood, try out the pizza at Make Pizza and Salad – so good. 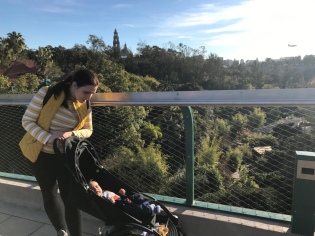 Day Two
Day two started off great. We managed to coax Rishi into lying in, even though he initially woke at 5am. But we got him back to sleep and napping with us. Epic. 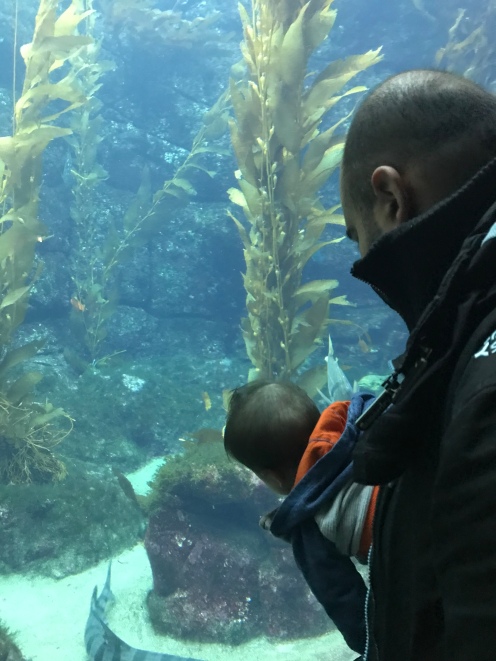 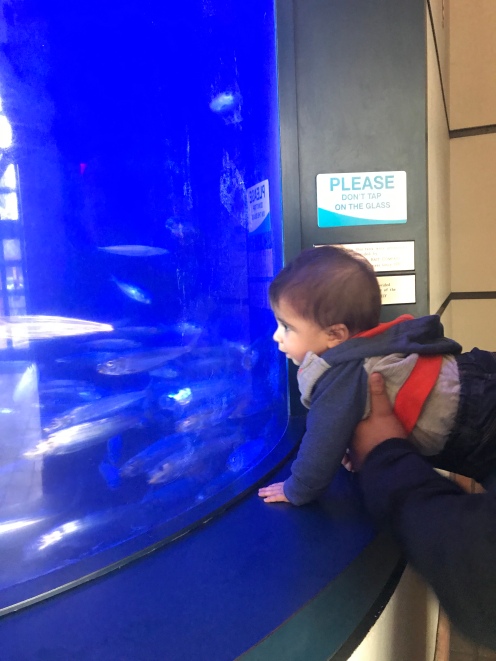 As it was a rainy day we opted for Birch Aquarium. Rishi loved it and that was the best thing about it. He seems genuinely interested in all the colours and following the various fish. For my husband and I, we had hoped for more. This was a day where not having a car cost us. The aquarium is a 1 hour plus tram and bus ride (each way). It was a long trip for a relatively short visit. If we could have nipped in and out it would have been great. The bus journey (which was even longer on the return trip) was helped by strangers playing peekaboo games with Rishi, as although he’d done pretty well, there were moments where he was clearly fed up, much like we were!
Day Three
The last day in San Diego was my outright favourite. I don’t know if it was the weather (the sun was shining and it was a warm 21degrees) or the fact that we had slept properly for the first time in an age, but it felt like the first time that we were properly on holiday. We walked to the Gas Lamp Quarter to pick up an Old Trolley Bus Tour. Pre-kids it isn’t probably the thing I’d think of doing but as we didn’t have a car and we were short on time it was the perfect way of seeing the city and also allowed us to tick off a few sights and must-sees. We picked up the tour with “Sam, I am” and out of all the conductors he was my fave! Until I went on the tour, I hadn’t appreciated how beautiful San Diego was – and what was amazing was that Rishi slept all the way to Old Town, so we got to enjoy the tour ourselves and Rishi slept perfectly in the ergo. This made me a lot happier! I know how important naps are to Rishi’s mood and his night-time sleeping and so I get super anxious about him sleeping on the go (something I definitely need to work on) so the fact that he had the nap of my dreams made me a lot more relaxed. Krish often says he doesn’t need to worry about these things as I do enough worrying for the both of us…. great! 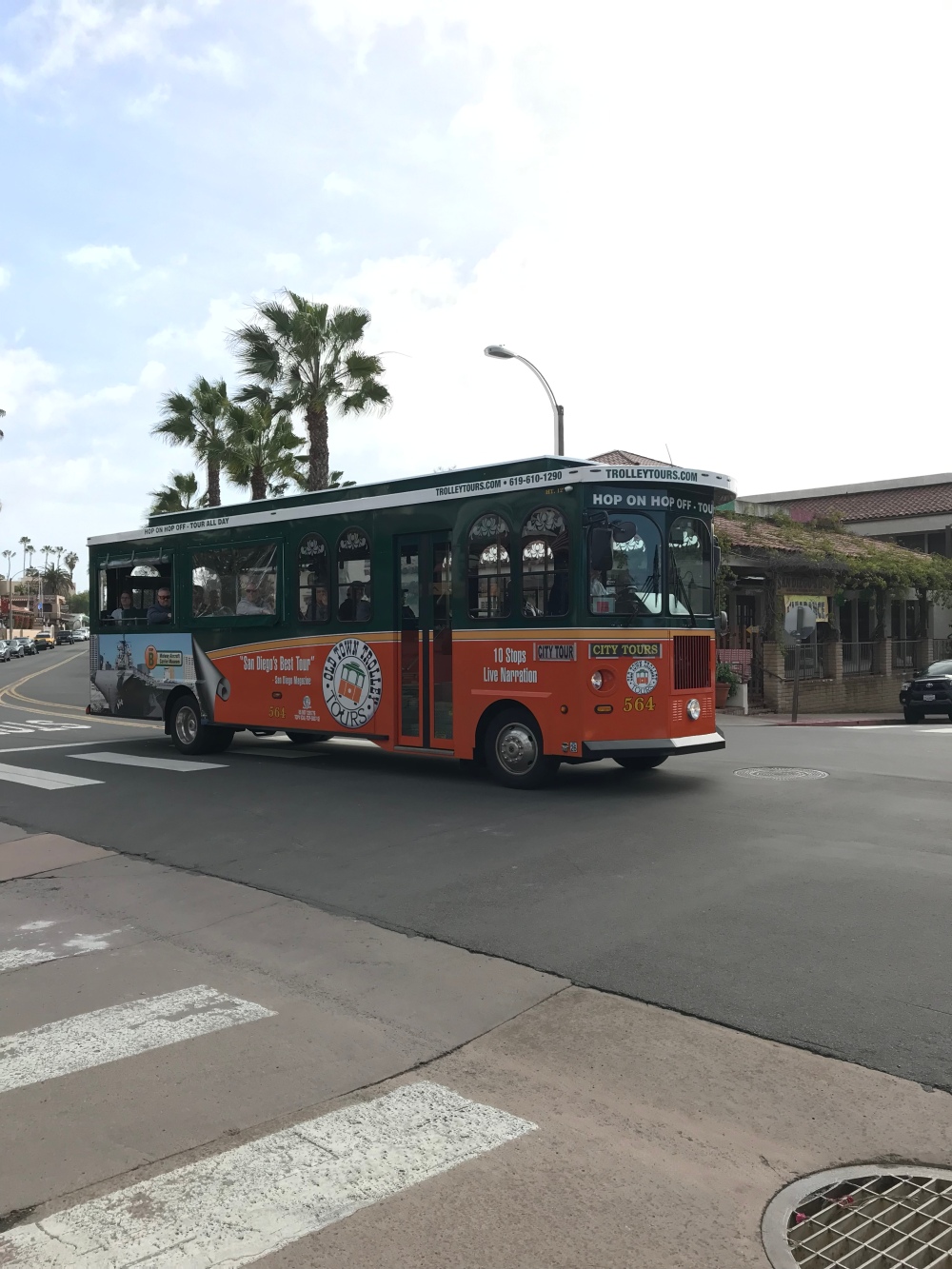 We got off at Old town and the main reason, for me, was to eat Mexican food.  I wasn’t totally convinced how this would go down with Rishi, but I thought I would put baby led weaning to its first proper test.  Rishi loved it and enjoyed his first mexican meal at the Old Town Mexican Cafe. 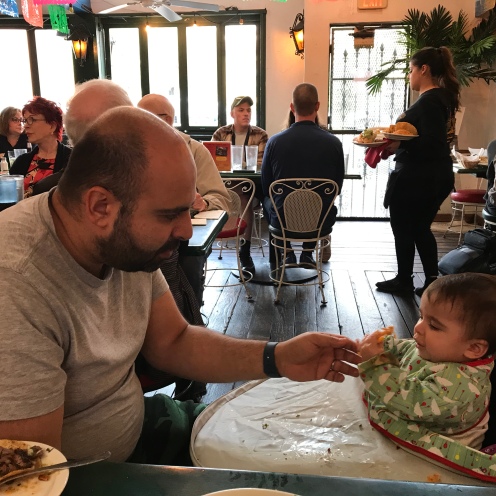 After having a wander around the Old Town we ventured to Conarado Beach.  If we are lucky enough to return to San Diego again, I would love to spend more time there and stay in that area. It was so beautiful and had a great feel to the place.

We ended the day with a few drinks in the Gas Lamp Quarter, not late on but still trying to get the vibe of the area that Krish had partied in four years before. I had serious mum guilt but Rishi was perfectly happy, playing and they were so welcoming to kids, I was pleasantly surprised with all the help they gave us! They had little kiddie cups and we got food for him aswell, so all round a great day for all three of the Spring-Manek’s.
So in the end, our little trip to San Diego was far too short for my liking and I cannot believe that a week of shared parental leave has gone. Time really does fly when you are having fun.
Advertisement