There’s plenty of things to see and do In Lanzarote, even with a little babe in tow. To be honest, so long as we manage the feeding and napping as he needs, Rishi is actually “portable” at the moment. I know it is going to get more difficult the bigger he gets.

One of the islands top sights is the Timanfaya National Park. It’s in the southwestern part of the island and it’s over 50 square kilometres. It’s made up of volcanic soil and when you see it, it’s like something out of a Star Trek film or what I imagine another planet to look like. It was declared a national park in 1968 and is made up of the fire mountains which were created between 1730 and 1736 (and then later in 1824) when more than 100 volcanoes rose up and erupted. It created a dramatic and very different landscape. 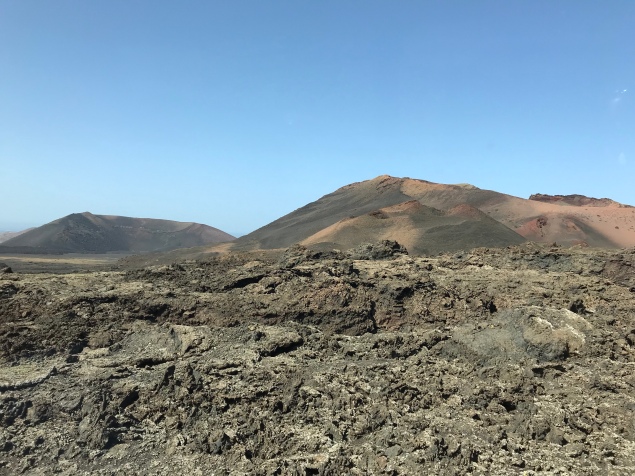 So let’s get the first question out of the way… can you take a baby? Yes, absolutely. I wouldn’t suggest taking a buggy (but I did see some) but instead pop your baby in a carrier. It’s pretty hilly and quite busy so much easier to get around if the baby is kept safely in a carrier. Rishi always prefers the carrier anyway as he likes to look around and take everything in.
We are staying in Puerto del Carmen and set off early. It was a pretty short drive, only 30mins (even though my husband managed to get a little lost) and we managed to only queue for a few minutes. A friend told us to get there early in the day and I’m so pleased we followed his advice. We arrived just before 10am. By the time we left however (about 12ish), the queue to get in to the car park was massive (easily an hour, if not longer). It was super hot aswell, so I’m pleased we ventured out early and didn’t have to sit in that traffic. 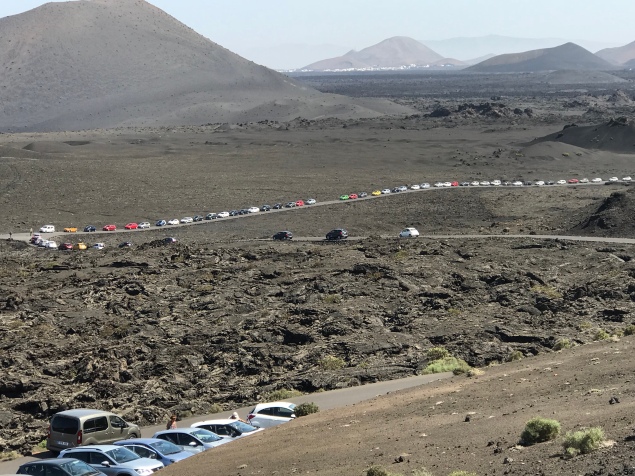 We managed to time the arrival well and so we headed to the restaurant first and I fed him. The views from the restaurant are spectacular so it was a pretty cool place to sit and take in the view for a while.
Outside the restaurant, there’s a view point and there’s a few displays, people cooking food in the heat and throwing water to make a mini geezer. We made sure that we got a few family snaps with the Martian-like landscape in the back… and headed off to the buses. 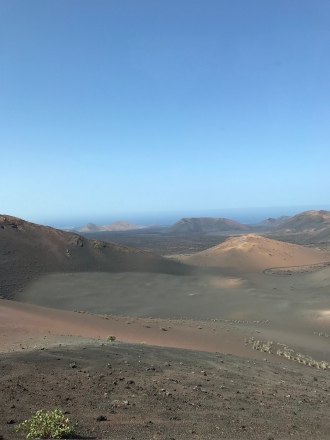 There are small group hikes (not child friendly) which you can book but this had to be done in advance, otherwise your only way around the park is by bus with automated commentary. Normally, I would think this was terrible but it was actually great. The bus tour lasted 30-40mins and took you round much of the park and by the coastline. The commentary was informative (not boring) and the landscape was incredible. I was really impressed by the whole thing and so pleased we did it.
Afterwards we jumped back in the car and headed to the visitor centre. This wasn’t busy at all and it’s free to go in so worth a visit. By this time Rishi had fallen asleep so we could wander round and enjoy. It’s definitely worth heading outside. The visitor centre is set on a lava flow and it’s pretty incredible to go and stand on top of it. It’s also worth heading to the theatre which shows a short show on the eruption. Very loud so not one for little ones!

We spent a whole morning at the National Park and it was well worth the visit. I’m so pleased we ventured out… especially as it was our first proper daytrip whilst on holiday with Rishi!
Essential information

Top travel tip: get there early if you’re going under your own steam. They seem to give preference to the coaches and the car park queue gets backed up massively.